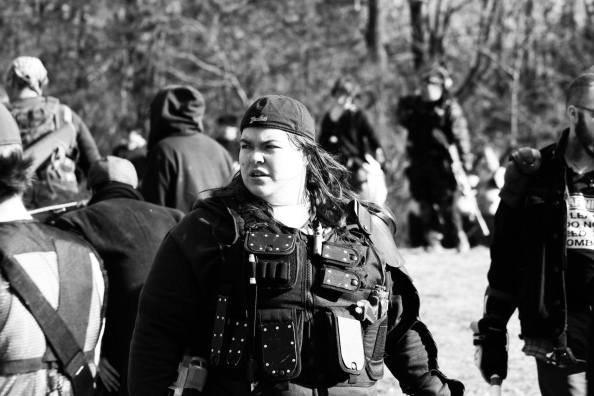 I’ve got a pretty lousy memory, but I remember a lot of firsts in my life.

I remember the first time I got a solo in a choir performance. I was so excited, I could hardly stand it. I remember going in to get fitted for my costume and the seamstress frowning. “She can’t be up front,” she said, “what’s that going to look like? Put her in the back row.” I didn’t realize then she meant because I was fatter than the other girls. I didn’t figure that out until a bully in my class made it abundantly, loudly clear at recess the very next day.

I remember trying out for the role of Ms. Hannigan in Annie. I told the drama teacher I wanted to be on Broadway when I got older. “You’ll need to lose weight for that,” she said, “being heavy doesn’t work on Broadway.” I didn’t learn until later she, herself overweight, had tried to be on Broadway once. Learned from experience, I guess.

I remember. I might not remember what I ate for lunch two days ago or where I left my bag some days, but I remember every damn comment. Every doctor who never took me seriously and told me I just needed to lose weight. I remember every comment, every time I got laughed at in the street. Stories like those are memories worn into my mind. I won’t forget them any time soon.

But there are good memories too.

I’m going to tell a story here about a poignant fat-related story. And then I’ll get to my point. I was at an event where a number of small larps were being showcased. I signed up for one game because it abstracted emotions and events using music, which I thought was cool. Little did I know until too late that the game was about relationships, people falling in and out of love. I panicked. I was afraid of seeing the disgust in someone’s eyes knowing they’d have to date a fat girl in character. I was so cautious and scared it almost made me leave the game. But I stuck it out. And in that game, a guy I didn’t know at all played my love interest with such care it made me glow. When he stood up and asked me to slow dance, I nearly burst into tears. It was all I was able to do not to step on his toes. I’d never slow danced with a man before. I’d never had the chance.

Larps have given me experiences that escaped me in my life because of a lot of social anxiety due to weight. I experienced what it was like to be a woman in a position of power, confident and powerful, when before I would hide. I got a chance to be on the arm of the most handsome men and women at a game. I’ve had the chance to play out love stories, stories of triumph. To lead battles and armies. To learn to be confident in my own skin.

I’ve also had a guy at a convention game look at me and then go to a game organizer and say he needed to trade characters because “I would never date THAT.” He was meant to play my husband.

I’ve had a guy meant to be an enemy of mine in a game say, “I’d feel bad beating you up, I can run rings around your fat ass.”

I had a woman tell me I wasn’t allowed to play a sidhe in a Changeling: the Dreaming larp because “there aren’t any fat sidhe.” (Jokes on her who helped put THAT change in the 20th-anniversary edition, but hey…)

I remember a lot of stories about what it’s like to be fat in this world. And to be fat in the larp world too. And I have only one thing to say about it after all these years:

I’m not too fat for your larp.

You heard me. Larp is a fantastic place, a blank canvas upon which to build whole new worlds, worlds where you decide the structures, the rules, the norms. And as the designers, writers, organizers, and producers of games, it is in your power to challenge the status quo of how fat people are treated in your games. You have the power to make the decisions about how people are treated in your community and in play based on the atmosphere you cultivate and the games you design. So why do so many games still have atmospheres where people who are fat are mistreated? Where being fat marginalizes the positions you’re allowed to have? Or the fun you’re allowed to enjoy?

The simple matter is being fatphobic and hurtful against fat people is the last socially accepted bigotry enacted by almost every single group anywhere. Otherwise progressive communities and marginalized populations will still turn inward on fat members and harass, shame, ostracize, or minimize them when they would never consider letting that treatment go unchallenged to their own group. We as a society celebrate striving for tolerance in much of our media, giving us feel-good messages about love and kindness and acceptance with one hand, and making awful fat jokes with the other. And this same process happens everywhere, in every subculture group. Including larp.

The problem is universal and yet hits different groups disproportionately. For example, it’s no secret that fatphobia affects women disproportionately more than men (although mistreatment of fat men is absolutely a thing). Women are put under the lens, pulled apart by people of every gender for the way they look, and their fat pointed out at every turn. Yet in a medium where we create our worlds, why is this still the case? Because we bring our bigotries with us. And in a real world where we can’t imagine not picking everyone apart for that stray pound, why the hell would you not do it in your games?

Because it’s not right. And by continuing to do so, you’re creating hostile larp environments. Even if your game purports to be progressive, if you don’t consider fat bigotry in your events and designs, you’re not making progressive environments that are equal for all. You’ve failed in your inclusivity.

Here’s a handy dandy list of how you might mess up at including size discrimination in your larp. We’ll call it the “If You ________ Then Your Game Might Be Fat Phobic.”

Okay. So here we are at the end of this rather scathing list. And you might be asking: so what do I do to make sure my game isn’t fat phobic? Well, take a look at that handy dandy list and don’t do those things. Work hard to make sure people who are plus size, people who are fat, are in positions of power. Fight back against fatphobic jokes. Make sure you recognize the power dynamics being played out against fat players and their characters and help adjust the narrative so they are not pushed out by those who equate fat with things like laziness, slovenliness, lack of power, etc. Do the work to represent the life of fat people accurately and do not focus your games on the life of fat people and their challenges unless you know just what you’re doing.

As for me, I know that the world isn’t going to change overnight. I’m aware that there are plenty of places which will never shift the way they think about fat bodies (the clothing industry, for example…) But I solidly believe with a little conscious work we can make larp spaces more accessible and friendly towards body types of all kinds. By making sure people of all sizes fell comfortable coming to your game, you’ll enrich your game by bringing new experiences and new voices into your space. And you’ll prove that you recognize that fat people need not and should not be erased from your stories.

Embrace a new way of thinking. Or join in fatphobia as a phenomenon. There is no middle ground. And if you’re about bringing fatphobia into your games, just tell me so. Because then you get from me a big old…