So apparently, Captain America is a HYDRA agent now. And everyone seems intent on telling me how I should or shouldn’t feel about it.

If you’re not sure what I’m talking about, let me fill you in. Captain America, the star-spangled hero that’s graced the comics since the 1940’s, has had a rough time of it in recent years. First, Cap got aged to an older man thanks to some shenanigans, and had to retire from being Cap. Steve Rogers handed the shield to his friend Sam Wilson aka Falcon. For a time he became the head of SHIELD and even went on to still try to be cap, even in his elder years. But events in the comics recently gave him back his vitality and youth, and he took the name Captain America again to kick some Hydra ass.

Except it turns out, thanks to the new comic Captain America: Steve Rogers, that Cap isn’t the Hydra ass kicker we thought. You see, according to the first issue written by Nick Spencer, Captain America is apparently a Hydra agent.

Now, I know what you’re going to say. “But it’s a comic book! There’s clearly some mind control going on, or reality changing, or whatever nonsense is going on. This is a gimmick, a ploy to sell first issues!” And yes, all these things may be true. Cap’s youth was returned by an incarnated cosmic cube named Kubiq, and that may account for the odd changes to Cap. But it isn’t just the modern Cap that’s apparently jumped on the squid-faced bandwagon. No, Captain America #1 has a flashback sequence through the book that shows little Steve Rogers with his mother when she’s rescued from her drunk, abusive husband by a woman who radicalizes her into Hydra. The indication then is that not only is Cap a Hydra agent, but he has been for a very, very long time.

The first issue of this Spencer run landed on shelves with a proverbial bang in a week when Marvel needed to score serious press attention. DC was launching the rebrand of their entire company through their event Rebirth and might have otherwise dominated the news cycle. But thanks to this huge heel turn, Marvel drowned out DC’s launch in a big way. And of course they did. Because the hero of America has become the vehicle of a fascist organization, a tool of everything he ever fought against. So, the internet went nuts.

The fan response has been, to my eyes, almost completely negative. A great example of the responses I’ve seen comes from TC Curly, a friend of mine, who said:

I wouldn’t mind a marvel character heel turn, but having cap join hydra is like having aqua man join the Aryan nation. It’s bizarre, It’s drastic, and it just feels really dirty.

Even Chris Evans, the Marvel Cinematic Universe’s Captain America himself, got in on the concern about the recent reversal, stating on Twitter: 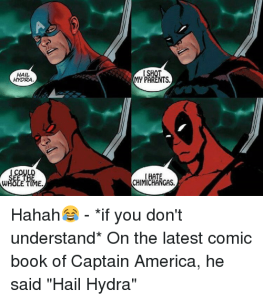 There’s been quite a lot of articles about how this is a desecration of everything that Captain America stands for. Plenty more are talking about how this is a gimmick that will just be reversed, although Time magazine’s interview with Cap’s creative team basically says it’s not. Still others point out, rightly so, that having Cap turn into an agent of an organization that were associated heavily and born in the comics from the Nazis is spitting in the face of the origins of the character. Specifically, Captain America was written by two Jewish men, Jack Kirby and Joe Simon. And now, he’s being retroactively written as being a tool of the regime that supported Hitler’s Nazi regime.

And this is where the conversation online has taken an interesting turn. Because while there are thoughtful articles pointing out the problem with associating Cap with Nazis, other articles have taken the time to distance Hydra as an organization from the Nazis and their activities. Specifically, they point to the origins of Hydra in fascism across the globe rather than in the Nazis in specific. And it’s this attempt to bend over backwards to save face for the Spencer storyline that’s got me frustrated and a little angry.

Like this new storyline or not, the Spencer storyline has given people a chance to discuss a really difficult situation: the use of Nazis in a major plot arch through Marvel comics. Like it or not, Hydra was introduced as a major fascist bad guy faction that had its start associated heavily with the Nazis. One only needs to think hard about the very first major HYDRA bad guys and the first one that probably pops to mind would be The Red Skull. Who, in the comics, looked early on a lot like this:

Yup, that’s pretty blatant there. Swastika and all. Nazi.

Then there’s Baron Von Strucker, a major Aryan ‘purity of races’ kind of guy who was a major part of HYDRA for years. While comics tried to back-track away from Von Strucker’s Nazi associations too over the years and dropped a bunch of his white-power motivations, the guy still sported the ol’ red armband for a long while.

Over the years, Hydra did branch out to back other fascist regimes worldwide in the comics, but a huge part of their past remains with the Nazis. Red Skull remained that swastika wearing presence in the comics, a constant reminder of the genocidal birthplace of the group in comics. Later writers tried to back Hydra away from the Nazis too, but the presence of them in Hydra’s past remains. And while the Marvel Cinematic Universe worked hard follow that distancing tactic, going as far as having Hugo Weaving’s Red Skull give a diatribe about how Hydra was only using the Nazis in Captain America: The First Avenger, that cannot divorce the history of the Nazi’s fictionalized presence in the comic book organization.

[[On another note, the MCU doesn’t always separate the Nazis from HYDRA so much. Agents of SHIELD bad guy Daniel Whitehall actually was a Nazi scientist named Rinehart who experimented and dissected people on the show. All while looking like this.

Still questioning whether Hydra is associated with Nazis? No? Me neither.]]

Apparently people can try. Because articles are taking their time now to do so, making it very clear that Hydra is more than just Nazis. But why now? Why have this in-depth discussion about how these genocidal, world-dominating, fascist-supporting aren’t really Nazis now? Because Captain America is now being associated with Nazis. And if they can’t deny the storyline is happening, then at least they’ll deny that the organization is that bad.

It’s this hair-splitting that is leaving a bad taste in my mouth. Guys, Hydra were Nazis. Red Skull was this guy for years. This guy. Right here.

And instead of just accepting that Marvel is associating our star-spangled hero with the Nazis, people are bending over backwards to explain how its not that bad and mincing whether or not Hydra itself is Nazis. That might be even more insulting to me than what’s going on with Cap. People are having legitimate emotional responses to seeing their beloved hero becoming a Hydra agent. Some of those reactions have to do with the horror of seeing Captain America be associated with the Nazis. For Jews especially, it smacks of an emotional ignorance about the hero Cap was to those who look back at WWII and see the specter of the Nazi holocaust overshadowing their families.

Plenty of folks are having legitimate emotional reactions and saying no, it’s not okay. Instead of acknowledging that emotional response and how it might be insensitive to Jewish readers, people are in a rush to say “They aren’t Nazis! You’re over-conflating it!” It’s comic-splaining at its best and bordering on gaslighting. “You’re seeing Nazis where they aren’t!” 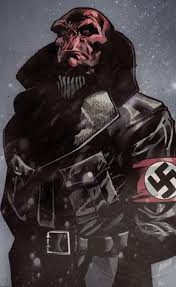 Ahem. Really? So that swastika is just a tibetan good luck symbol on Red Skull there, huh?

This response smacks of so many cases of people white-washing and ignoring the legitimate concerns of Jews over representation and insensitive treatment that it infuriates me. While I don’t necessarily think the situation is anti-semetic exactly, it feels careless in its consideration of how this plotline might impact those for whom Nazis have a more personal hatred.

I remember showing my grandmother, a Holocaust survivor, Captain America in the comics when I was younger. I told her in the comics that he first showed up punching Hitler in the face. I remember her laughing and shaking her head at it, in this kind of bitter way. I wonder if she thought how funny wish fulfillment art is, though I never asked her how it made her feel. I wonder now how this comic would make her feel, seeing Cap turned to the dark side. Mostly, I wonder how all these “well, actually…” articles about Hydra would make her feel. “Well, actually they’re not Nazis. They just wore swastikas and supported Hitler’s actions in World War II before moving on to be fascists elsewhere. But they’re totally not Nazis themselves. Really!”

My grandmother passed away when I was sixteen, so she’s not here to ask how she feels. But I know how I feel about the Captain America thing. I’m going to keep reading so I can see where Nick Spencer and the Cap team is going with this plot. But mainly, I know how I feel about these articles trying to drive away any feelings of discomfort by Jewish readers by comic-splaining away the Nazis. As opposed to listening to those fans’ feelings with compassion and understanding, people would rather we shut up and stop associating Cap with one of the most genocidal groups of all time.

Funny, I would like to stop associating him with them too. Only now, thanks to the comics, I can’t. So let me have my feelings, thanks, without explaining to me why I should sit down and be quiet about it. My comic nerd rage is valid too, especially when it’s fueled by personal history and real-world religious bigotries.