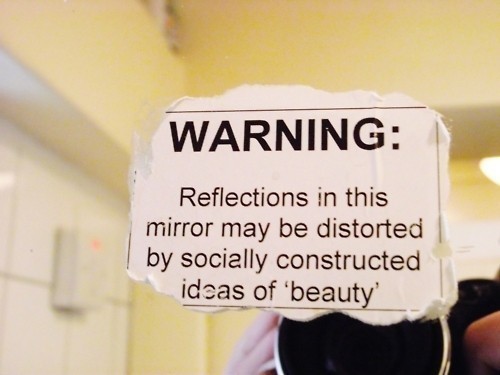 This past week, a video has gone around by YouTuber and comedian Nicole Arbour, whose past hits include such titles as “Dear Instagram Models”, “Why Girls Are Crazy” and “Why You Really Got Divorced.” In this video, entitled “Dear Fat People” the wannabe shock-vlogger decided to go after her new target, which was pretty much anyone who is fat.

I won’t link to the video, or pretty much any of her other videos, because I refuse to assist in her channel getting further hits. However, here’s some of the glorious highlights of that 6-minute hate fest.

‘Fat shaming is not a thing. Fat people made that up,’ she says. ‘That’s the race card with no race. “Yeah, but I couldn’t fit into a store. That’s discrimination”. Uh no. That means you are too fat, and you should stop eating.’

‘If we offend you so much that you lose weight, I’m okay with that,’ she says. ‘You are killing yourself. I’ll sleep at night. Maybe I am jealous that you get to eat whatever you want.’

‘Obesity is a disease?’ she asks. ‘Yeah, so is being a shopaholic – but I don’t get a f***king parking pass. It would make a lot of sense if I did. I am the one with all of the bags.’

‘I am not saying all of this to be an a**hole.  I am saying this because your friends should be saying it to you.’

So let’s start with the facts: fat shaming is a thing. Fat shaming and other forms of body shaming are a way for people to impose society standards and their own upon you and your body. It is a type of discrimination that is rendered against those who are considered overweight, and especially those who are considered obese in our world. It comes in many forms, from advertisements that tell you to lose weight so you’ll be happier (‘just shed those pounds and you’ll be frolicking in this field like me!’) to the poor media representations of obese people, to blatant and outright hatred like that expressed by Arbour above. Fat shaming exists. It also doesn’t work.

This, from Professor Jane Wardle, director of the Cancer Research Health Behavior Center at UCL:

“Our study clearly shows that weight discrimination is part of the obesity problem and not the solution. Weight bias has been documented not only among the general public but also among health professionals; and many obese patients report being treated disrespectfully by doctors because of their weight. Everyone, including doctors, should stop blaming and shaming people for their weight and offer support, and where appropriate, treatment.”

Yup, that’s a scientific study, Nicole. Stick your fingers in your ears all you want, but the science and years of experience from plenty of fat people out there says that fat shaming does not work. Getting on YouTube and supporting fat shaming in defiance of the scientific evidence puts you right up there with anti-vaccers and climate-change deniers, people so intent on supporting their own bogus viewpoint that they won’t pay attention to actual facts. Fat shaming fits every definition of bullying and does not work.

In fact it has the opposite effect. People who experience body shaming are prone to have more problems, like depression and anxiety, eating disorder issues, body dysmorphia, etc. And to me, that’s a no brainer moment. I don’t have to sit here and think hard about the fact that shaming someone doesn’t increase their overall life quality. That’s not a stumper. The part that gets me is how other people don’t see that.

The good part is, plenty of people did in the case of Nicole Arbour. Her video was pulled from YouTube for violating terms of service, for which Arbour screamed censorship. Next, blogs all across the internet responded with articles blasting the hateful video, and YouTubers began tossing out their own response videos decrying the fat shaming Arbour espouses. My favorite video comes from Whitney Thore of My Big Fat Fabulous Life, whose whole video I’m going to link here at the bottom. But Thore tells it like it is about what it’s like to live as a woman being fat after gaining weight from poycystic ovarian, stating, “You can’t see a person’s health by looking at them.”

Tess Holiday, the fabulous plus sized model had a fantastically dismissive response:

And that’s where I stand on Arbour and her kind too. Yes, her kind. Everyone’s met one in their lifetime. The self-righteous, hateful kind who hold to the idea that they have a right to shame another human being for how they look. That they can judge someone for how many pounds they are, or what they look like in clothing. You’d think Arbour would have seen one or two after school specials growing up to know that bullying isn’t okay, but clearly the lesson didn’t take.

Arbour says she’s just telling it like it is, and it’s no secret that shock comedians have been doing this kind of thing for a long time. What Arbour and many others still seem to be missing is that the age of ‘all press is good press’ is coming to (if not already at) an end. It’s no longer a game online of just getting your name known. Now people can just Google your work and see what you’ve said, and make their own judgements. Case in point, what happened to Arbour after she posted up this video.

You see, Arbour was relying on the out of line content of her six minute bit to get her attention. And it did. She was fired from a movie after director Pat Mills saw her ‘Dear Fat People Video’ because – wait for it – the movie was about young dancers discovering body positivity! Way to shoot yourself in the foot there. And it’s the response by director Pat Mills of Don’t Call Irene (which I’m going to be checking out in response to this move) that makes me feel like maybe, finally, folks are getting the point.

Arbour certainly didn’t. She responded by defending her video, saying she wasn’t really shaming people. That it was all an act.

“The video was about obese people. I was very specific that it’s not the average guy with some cushion for the pushin’. [The message is that] we really care about them and we want them to be healthy because I’m selfish and I want them to be around,” she told BBC. “I don’t think it’s a cheap laugh. Twenty million views isn’t that cheap. I’m an equal-opportunity offender and it all goes back to comedy.”

Oh, so it was just acting. And besides, it was about obese people, not regular people who have some “cushion for the pushin'” (which is just the worst term ever, please stop using it right now, this instant). Fact is, if you don’t think that what you said is shaming, Nicole Arbour, I don’t think the word means you think it means. And just because it’s comedy doesn’t mean that people won’t think you’re awful for what you’ve said. There’s a clap back headed your way from a lot of people, Nicole, and it’s pretty awesome. 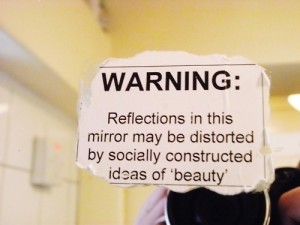 There’s no denying that this issue is a personal one for me. As a woman who has been fat all my life, having hit about two hundred pounds at the age of twelve, I have literally spent twenty years of my life dealing with the stigma of being overweight. I’ve had the unfortunately not so unique experience of enduring callous, hateful, disgusting, often terrifying comments thrown my way. I’ve had people tell me I should kill myself for being fat. I’ve had kids chase me in the subway, snorting at me and screaming ‘fatty!’ while others looked on.

I’ve had people I respect, trust, and love tell me such heartbreaking things that, I’m sure, they thought were just helping. Things like:

These are all quotes said to me, each by people I know: family members, friends, co-workers. The last was a guy I knew in college that I wanted to date. And you can bet that I remember his name, all right. I remember he was a funny, skinny nerd guy who wrote video game music and lamented about the way he was bullied for being a nerd in high school. I remember him as the guy I never spoke to again, whose name is now synonymous with hypocrisy.

So when I say I’ve heard this all my life, that I didn’t need the science to explain to me that fat shaming doesn’t work, you can trust in my experience. And that this article comes with no small amount of happiness to see the responses

Fat bodies in our society are reviled, belittled, hated, and fetishized. Those who are overweight are ignored, demeaned and shunned. We are expected to accept vile bullying because society still accepts that fat is one of the worst things a person can be. Fat shaming is expressed in every part of our culture, in every place people build communities, even those that are meant to be accepting, inclusive, and safe. And it’s because people still perpetuate the notion that fat is the worst thing that you can be.

But there’s a silver lining in this story. If you google Nicole Arbour now, all the articles that come up as the top searches aren’t about her, exactly. It’s about how she was fired from a movie because of her hate-filled little video. And if you look at nearly all the comments responding to this nonsense, you see people calling out her video for what it is: jealous, narcissistic hatred. Hatred from a woman so trapped within the rat race of societally acceptable beauty that she would turn against other human beings and mock what they look like for the sake of five minutes of fame.