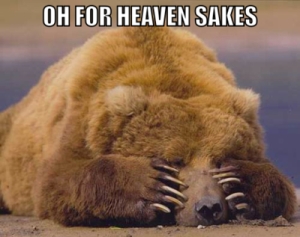 It’s summer. The windows in my room are open so I can smell the delicious aroma of Brooklyn in the warm sun. Outside, the neighbor’s dog is snarling his little hell beast head off at what I can only assume is some kind of wildlife. I sit in my room and realize that one week ago, I graduated from the NYU Game Center with my MFA in game design. Same day I flew out to WyrdCon and ran a very successful Dresden Lives game with my cohort Josh. I came home to prep more game material for the upcoming DexCon convention in July, and I’ve got a full schedule of freelancing ahead. I’m also waiting to hear about an application to a PhD program I’m very excited about. Plus, I’ve been writing blog posts that apparently have been hitting some serious notes with people, which I’m proud of.

But I haven’t been able to think about any of that. I’ve been distracted.

Ten days ago, I found out I’ve got a brain tumor. And it’s freaking me the hell out.

For the last year or so, I’ve been chasing down what is at the heart of all these medical problems I’ve been having. Most docs I saw simply said that my symptoms were related to my weight and told me to ‘go lose weight and things will be better.’ And while that is undoubtedly the case, as my weight has caused a strain on my system, there were some puzzling medical issues coming up for me. So instead of listening to those docs who decided that my only problem was weight, I went to see an endocrinologist. She took a look at my symptoms and ordered a battery of tests. I was poked, prodded, MRIed, CAT scanned, and gave more vials of blood than I could count – all the while going to class and trying to graduate school. I was racing the clock, trying to get results before I graduated and lost access to the student medical center and the wonderful doctor who was helping me there.

In the last week of school, just before graduation, the doctor sat me down and gave me the news. I’ve got something called Cushings disease. What that means is I have a small tumor in my pituitary gland. That tumor produces a hormone, ACTH, which tells my body to produce too much cortisol aka “the stress hormone.” Wonder why I’m always such a stress ball? Hey now, look, an answer! This diagnosis is also linked to a number of other major issues I’ve been facing, including my weight gain. That’s right, Cushings has a lot to do with the body building up fat. My guess is this has been going on for about two years, getting worse as time goes on, but we have no way of knowing. All I know is, there’s a tumor in my brain and the doctor says it’s got to come out.

When the doctor told me this news, I think I missed the next ten or so minutes of my life. I got out of the appointment, sat down in the waiting room, and couldn’t think straight. I realized I was going to have to talk to someone quick or I was going to panic. A brain tumor? I remember the doctor said that Cushings tumors are usually benign, so that was good. But this was a brain tumor. She had referred me to a neurosurgeon. That meant brain surgery. Some doctor was going to go into my head after they knocked me out with anesthetic.

I panicked just a little. I wanted to scream.

Then I went on social media and I Tweeted and Facebooked about it.

My folks don’t understand how I’ve been so open about having a health issue like this. When they talk about what’s coming up and the surgery I will be having, they whisper. My dad wouldn’t say the word ‘brain tumor’ but drops his voice and mouths the words instead. I asked him point blank: “What are you so afraid of? It’s a brain tumor. It’s nothing to be ashamed of.” He couldn’t understand how I was going to be open about the situation. “It’s nobody else’s business,” he said.

I don’t get that. People are always telling me that in life, you should reach out and talk about what you need. And in that moment, sitting in the waiting room outside the doctor’s office, I needed to talk about what was happening. I needed to feel less alone in my skin facing this terrifying prospect. I went on social media and I said the words: “I found out I’ve got a brain tumor.” And in doing so, I discovered the beauty of the internet again.

We spend a lot of time awash in the crap that can come out of the internet. We (especially women) get hit with the trolls, the threats, the inane crap and the unintelligent garbage. We wander through a mass of online noise, looking for the beauty. At least that’s how I feel a great deal of the time. Yet in between cat videos and Upworthy click bait headlines, Pinterest boards and Amazon shopping, the internet is a place where community exists. And with a few words, I found that people respond in the most amazing ways. I reached out to folks and said, “I’ve got a brain tumor and I’ll need surgery to get it out” and the internet responded with well wishes. I received phone calls, texts, ect. I got immediate support from my professional colleagues and from friends I hadn’t heard from in a long time.

It’s the worst kept secret among people I know that I often find it difficult to ask for help. Yet in this moment, when I reached out, people were there. I feel like I could have survived all right on my own, dealing with my feelings. But instead of doing that, I put out a hand and the amazing people I know reached back. And I was not alone. In one day, I rediscovered some trust in the human race that cynical New Yorker me had set aside a long time ago. Heart two sizes bigger and all that, in one day.

So what happens now? What does this all mean? I’m going in for brain surgery, for one. That’s mighty scary to me. I went to see my neurosurgeon the other day and I’m confident in him and his team. They’re experts on this particular disease. The good thing is, this tumor is not cancer, that’s almost for sure. And should the surgery go well, there’s a quick recovery time. AND it means a good chance that a lot of my other medical issues will see an improvement should everything go the way the doctor said. There is a danger to consider in anesthesia for someone my weight, and that’s the scary part. And there’s the danger that comes from any brain surgery. But the doctor’s done over 3000 of these procedures already, so I have high hopes.

In the meantime, I admit to being in kind of a fog. I’ve tried to go on with my day, work as usual, do my writing. I came home from the convention and recovered from that and said ‘back to work.’ But there’s a gong inside my head over and over, saying quietly: in less than two weeks, you are going into the hospital. And I’ll admit it: I’m pretty scared.

So why talk about this? Because emotional honesty is important to me. And why talk about it in public? Because moments like these are something of a jarring juxtaposition to me to the talk about issues I do online a lot. This isn’t an issue that is a social justice worry, or a pop culture critique. This is personal and strange and I’m trying to be honest about it online so that my brain doesn’t just repress how crazy nervous I am. Instead of saying “I’m fine” I’m working to admit: I’m not fine. I will be. But right now, I’m dealing with it slowly. It doesn’t make me fragile, or in need of coddling, and I don’t need to be handled with care. But talking about this here is helping me to admit to myself the impact this event is having on my life.

I’m having brain surgery that could change my life. We have a date scheduled. And provided my insurance doesn’t crap out, I will come back with a chance to relieve a lot of health risks. And maybe, give me a whole new lease on life to feel better.

One can only hope. For now, I’m just going to spend the time prepping for the surgery. I have writing to do before the hospital stay, emails to answer, convention prep to handle. Life and work doesn’t stop because you found a kidney-bean sized thing inside your head that’s not supposed to be there. And I’m going to continue being honest about my feelings up until that point. But if I seem a little off the next few weeks, this is why.

John Adamus, my friend and editor, named the tumor Larry after the annoying neighbor from Three’s Company. So in ten days, Larry is getting evicted. Larry is going extinct. (And no, John, they won’t let me keep Larry afterwards in a jar, I already asked for you).

Until then, life goes on. And Larry and me gotta keep company, if only for a little while longer.

Meanwhile, to everyone who has supported me in this: thank you. When I reached out, you heard me. And that means more than I can ever say.