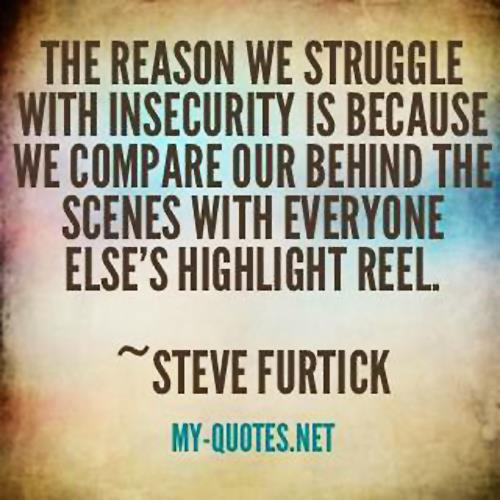 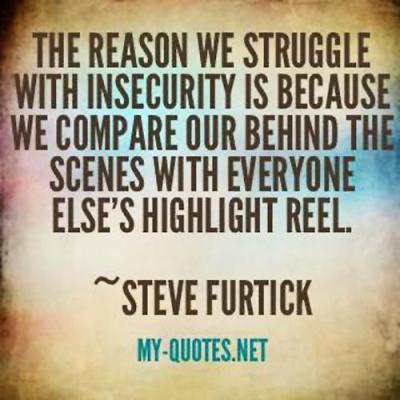 I’ve been reading a lot of words of encouragement lately about how to be a better writer. How to motivate yourself, engage with your readers, what to do and what not to do. A lot of it has centered around the idea that creative folks have a tendency to be extremely self critical about their work. In fact, one of the issues that writers seem to deal with is self-doubt to an amazing degree. I speak from personal experience when I say that my own issue is usually a crippling fear of my work being judged as inferior or lacking, which often can stall me when I’m just about to do a major writing push.

“What if it’s not good enough?”

“What if it’s not received well?”

“What if it’s not engaging enough?”

“What if the material is found offensive and I get yelled at on Twitter?”

(That last one is particularly troubling, but that’s an issue for another blog post).

The thing is, lots of people are insecure about their work. I mean, there are doctors and lawyers out there who worry about the services they provide. Having a crisis of confidence isn’t just an issue for the creative sphere. However, I believe that the inherent issue about creators taking it much worse than in other fields is the fact that the rest of the world invalidates creators on a regular basis.

Being an artist isn’t valued the way it should be in our society. People ask writers to do hours of work for pennies, for nothing, for exposure. They ask artists to ‘just draw me this, it’ll look good in your portfolio.’ And everyone can write, can’t they? So why hire someone who is a professional in the field, when you can cobble something together for cheaper? Thank goodness it’s not this way everywhere but ask anyone who has a child if they’re pleased their kid is a writer, and the response you’ll often hear is that they wish that child had been a ________ (insert higher paying profession here). Being an artist remains, to a large extent, looked at as a dalliance, a pie in the sky, unless you make it big. Otherwise, you’re just messing around. You’re not actually doing anything.

What a litany to feed your insecurity. What a mess to try and work through.

So when a writer has a complicated relationship with their work, with how they feel about themselves as a writer, it’s one thing to try and bolster them and get them into a better mindset. It’s one thing to try and help them see that there is validity to their work, and help them fight to be in a better headspace to create brilliant art. It’s another to invalidate their insecurity.

All feelings are valid. Whether or not they’re productive, that’s another thing. But I find that often when I’m reading encouraging messages about the writing process, there’s an insidious message behind the bolstering that sounds very much like tone policing to me. Don’t be negative about your work. Being negative is bad. It’s the mindkiller. You can do better than that. Just be positive. Face your fears. That’s what makes you a writer!

No. What makes you a writer is producing the work. What makes you a writer is getting up, putting words on paper, no matter how it happens. If you struggle with it but it happens, then you’ve written today. If you don’t struggle, good! You’ve written today. If you sit and slam your head into the wall and wonder if you’re wasting your life and then can’t write that day because of it, you’re a writer tackling a crucial issue in your writing process. I posit that grappling with your fears is part of the writing process. It’s a nasty, difficult, exhausting process, but it’s part of it. And telling folks that those fears should be tackled and moved past before a writer is ready is in my mind negating the struggle that that creator has been undertaking.

There’s this idea in our society that if you just pull yourself up by your bootstraps, if you tackle things head on, if you make the battle happen, then you’ll win. Isn’t that what G.I. Joe taught us? Our cartoons growing up? We learn a valuable lesson about self-esteem and courage in a thirty-minute episode and suddenly Knowing Is Half The Battle. The fact is the other half the battle is tackling the issue. But that tackling, that fight, is not a one day thing. For some, it can be a constant, ongoing struggle until they find the answer they’re looking for. And often the most well-meaning support can sound as though any writer who isn’t making headway into being positive about their work is a fragile writer that needs to toughen up to fly right. So I ask a question:

When did it become a sin to be sensitive about your work?

When did it become a problem to feel badly or have negative feelings?

Don’t get me wrong. I think life would be so much easier if we didn’t have these insecurities as creators. I think it would be amazing if every time I tackled a project, I didn’t have to face down some scary demons inside that tell me I’m a failure nobody will want to read. I wish that I could sit down every day without having to battle fear paralysis. But that’s my cross to bear. And others have their own. But I think that far too often these negative feelings are brushed aside with a forced ‘You Can Do It!’ smile that almost reminds me of those vintage WWII posters. But if you think of it for a second, those posters were propaganda, out to encourage people to forget about the fears they might have about, y’know, war.

I would never compare creation to war (because we don’t dodge bombs, folks, as much as it feels that way sometimes) but the cheerful enthusiasm without consideration for negativity being a part of people’s lives smacks to me of it’s own brand of writer propaganda. In our rush to try to improve ourselves as creators and help our fellows through the darkest places, we may be forgetting that people have a right to their feelings. And telling them How To Be Better might just be a way of telling them that they’re not good enough all over again.

I believe that instead of white-washing away the negative, of telling ourselves and each other that we need to have a stiff upper lip about our bad feelings, we need to acknowledge that they’re there. We need to acknowledge where they come from with sensitivity, honesty and empathy for each other. We need to support in ways that are a little less brute force. And we need to admit that for some, it won’t be a one-day, one-week or even one-year turn around. This might be a black dog battle that a creator fights every day of their lives.

Sure, it would be easier if the fight was over and the issue tackled and everyone had a self-esteem party. But that’s an internal struggle for the writer in question. But as long as they’re still fighting, and tackling, and writing, then that writer is doing the job. A writer, to be a writer, must do what they do: write. If they take deadlines for jobs, if they have responsibilities, they must meet them, even if the black dog of insecurity comes to visit. They have to pick up the fight because that’s what they agreed to do when they signed up to be a writer. But they’re still fighting. And they’re still writing. And they don’t always have to do it with a smile on their face, or in a way that other people feel is ‘best’. It’s their process, their feelings, and they get to have them. Even if it makes other people uncomfortable to see negativity. Even if other people wish they could ‘help make it better.’ Even if the prevailing idea is that feeling bad about yourself is bad.

Insecurity sucks. Feeling bad about your work sucks. But your feelings are your own.

May we all come to a place where we don’t have to feel this way. May we all fight that black dog and win someday. Until that time, I’m here with you, with my own dog to battle, getting the words done. But some days, I’m not doing it with a smile. And that’s okay too.